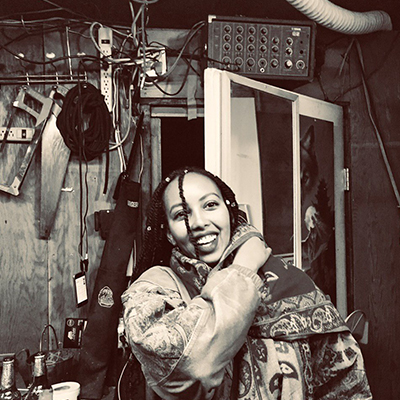 Edil Hundubey is the newest addition to the EMMEDIA team, arriving in the midst of the mayhem that is 2020. No stranger to the digital scene, Edil has an academic background in Communications & New Media and has spent the last eight years taking on a variety of roles in the arts as a writer, curator, art consultant, media arts collaborator, and events coordinator. A proud earth-dwelling being who strives to defy normativity in all ways, Edil is driven by a belief that no better outlet exists for the expression and creation of esoteric and artistic eccentricities than new media. Much of her time is spent investigating how the nuances of new media realms can be hacked to reveal new and innovative perspectives on the world around us. You're just as likely to meet Edil randonauting around the city of Calgary as you are on the pixel landscapes of World of Warcraft. 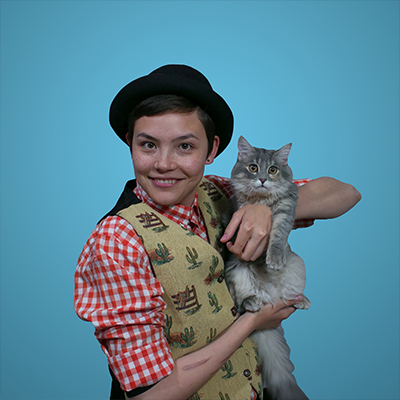 Emma Brockelbank (left) has been the Production Director for EMMEDIA since 2018. Coming from a film background, Emma's technical skills in sound mixing and fabrication have contributed to an art practice defined by large scale builds and soundscape accompaniments. Not without a sense of humour, the first question Emma might ask when meeting a new person is: "would it really be that bad if this was all a simulation?"

Christian Argyll, Operations Director has been with EMMEDIA since 2015. With a background in not-for-profit and arts management in Calgary dating back 17 years, he has also worked professionally as a photographer, filmmaker, and videographer. Overall Christian is a "people person" who enjoys putting ideas into action, both at the office and in the community.